Good morning!
I am going to share a lot that was probably one of the hardest layouts I have ever made -  not because of the products or techniques but because of the subject matter

Our goal in life is for him to remain cancer free 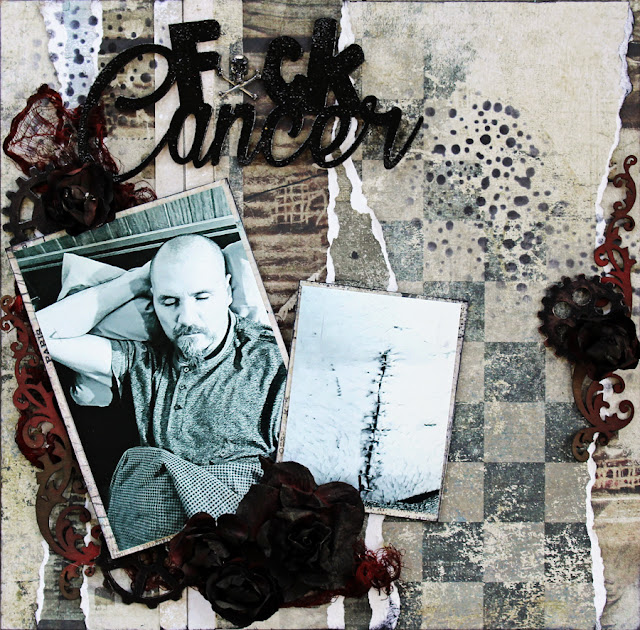 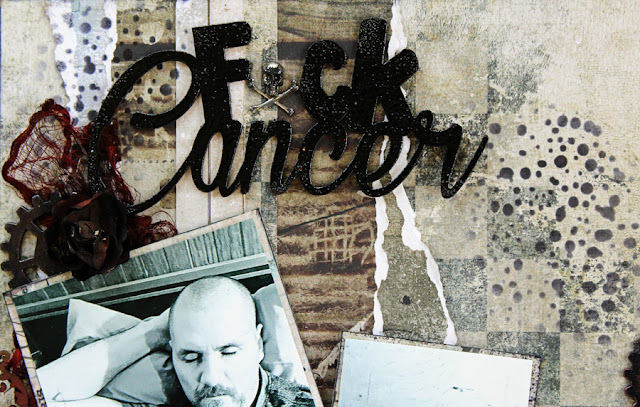 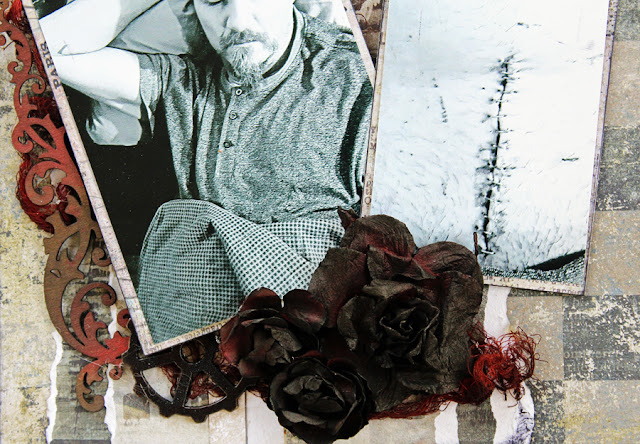 I sprayed the Scroll borders with red and black mist to keep with the darker theme...
I also sprayed some flowers from my stash as well as some cheesecloth to add more grunge. 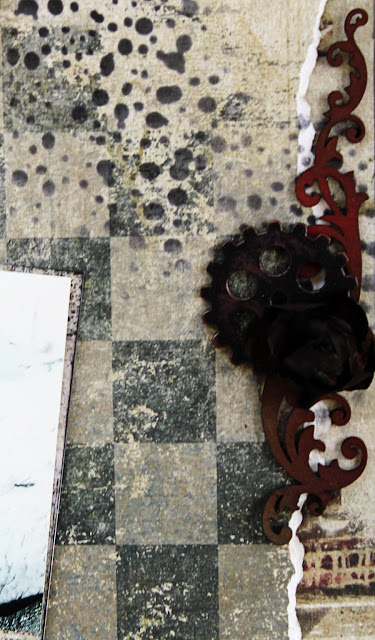 On the side I used another scroll border, misted flower, metal gear and a fabulous Soda Fizz stencil from SWTC that I used black in with.

In April 2018 we received the news that Jon has prostate cancer…The air was sucked out of the room….I couldn’t breathe….The world just stopped…I kept thinking “What???   He’s too young….This can not be happening” Then I looked at my husband and realized he was as scared as I was but he was being strong and he needed me to be too, so I would be.  I remember Dr. Chin telling us that it would be in Jons best interest to have the surgery.  When Jon had his biopsy done previously we talked about all the different options if it came back cancerous….neither of us wanted to risk the rest of Jon’s life and decided if surgery was an option that is what we wanted.  On November 29th 2018 he had the surgery.  We waited for a couple of hours in pre op, then came Jon’s turn to be wheeled away…..and I wasn’t strong anymore…I couldn’t hold back the tears….they ran down my face freely….I was so scared
Cody, Jon’s parents and I waited for what seemed to be an eternity before Dr. Chin came to see us.  I remember the words ‘the surgery went well and we believe we got all the cancer…Jon bled a lot but the surgery was a success and he will be ok’  Relief flooded over me…..I think I started to breathe again
After the surgery Jon was in a lot of pain….He was in post op for hours and no one would tell us anything.  Each passing minute seemed like an eternity and I was getting more and more worried.  I just wanted to see him.  Finally at around 6 pm (his surgery was at 8am) I finally got to see him…he was in so much pain….his eyes were glossy, he hurt so bad….I felt useless….I couldn’t help him.  Here is the man I love….my whole world…..in so much pain.  I have seen this man almost cut his finger off and just put a paper towel over it and wrap it up with electrical tape and keep going….hit his head so bad that he bled a lot and gave himself a concussion and keep working….have his wisdom teeth surgically removed and go to work within a few hours and he is writhing in pain….crying in pain and there is nothing I can do.  The first day was horrible, he couldn’t sleep unless I was laying next to him – in the little tiny hard bed.  The nurses were all awesome especially Emily who took wonderful care of Jon.  She was kind and caring and knew her job.  She was always on time with his pain medications, brought him warm blankets to lay on his incision and just took awesome care of him.  On Saturday she said she wanted to try something else since the morphine was not working and switched him to Toradol which worked. He was finally able to rest and begin the healing process. I slept at the hospital with him….I didn’t want to leave him and the wonderful nurses understood. On Sunday we got to go home.  I did my best to take care of him, giving him his meds, hot press for his incision, cleaning his needs, holding him, and not letting him see me cry.  He trudged through like a trooper, getting better every day.  On December 21st we received the pathology report saying he was all clear.  It was the best Christmas present we could have received!  I get to keep my husband!  His scar will serve as a reminder to not take life for granted!­

Thank you for stopping by
~Laura

Oh Laura, what a blessed and wonderful outcome for your husband and your family!! Thank you for sharing the story. I hope and pray his recovery will be good and he will return to normal soon! The title is more than perfect!

Great work.. Thanks for playing with us at MTW!!
Prayers❤️

Wow such a touching project! Your words touched me deep bit the LO did it before! Fantastic LO! Wishing your husband to continue healthy and clean!!! Thank you for playing along with us at More than Words Challenge!

Love this layout and I really admire how much sentiment you’ve put on it.
I hope everything goes ok and your husband keeps being cancer free.
Thanks participating on amore Than Words Challenge. ❤️❤️❤️

Oh, I do wish a healthy and prosperous 2019 (and rest of life really) for your husband and all your family. Your layout and journaling is so heartfelt and inspiring! Thank you for playing along with us at More Than Words!

A. bery powerful story and I thank you for sharing it with us all. It actually made me cry. So glad you all got a good outcome. All the best. xo 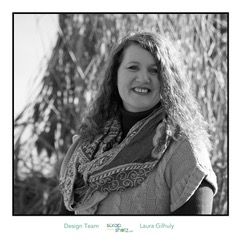